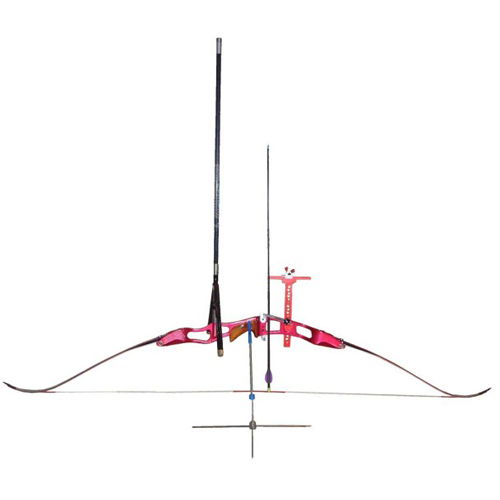 The recurve bow is believed to have been first used by the Mongolians, who used them from horseback. Being shorter than a longbow, it is possible to move the bow from one side of a horse to the other, and the distinctive recurve shape gives the arrow more speed, making it more effective as a weapon.

Most recurve bows are of the take-down variety, which means they can be taken apart for ease of storage and transport when not being used. A bow is made up of the following elements: 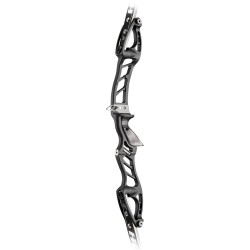 The riser is the central piece of the bow, and contains the handle with which the archer grips the bow. It is also the part of the bow that almost all of the other equipment is attached to, such as the limbs, sight, clicker and stabilisers.

The limbs attach to the top and bottom of the riser to form the bow. It is the limbs that provide the power of the bow - they are bent backwards as the bow is drawn, and they spring forwards when it is released to propel the arrow forwards.

When the limbs are attached to the riser without a string, the limbs actually point forwards. When the bow is strung, the limbs are bent backwards to form the recurve shape. The picture above shows an unstrung recurve bow above one that has been strung.

The string is a simple but incredibly important part of the bow. It attaches to the limbs by hooking loops at each end of the string over the ends of the limbs, and is carefully set to a specific length to ensure the bow has the correct bracing height. The length of the string is adjusted by twisting it - the more twists, the shorter the string becomes.

As the string becomes shorter, the bracing height of the bow increases. This is a measurement of how much the limbs are being bent backwards when the bow is strung - the more the limbs are bent back, the greater the distance between the string and the handle on the riser.